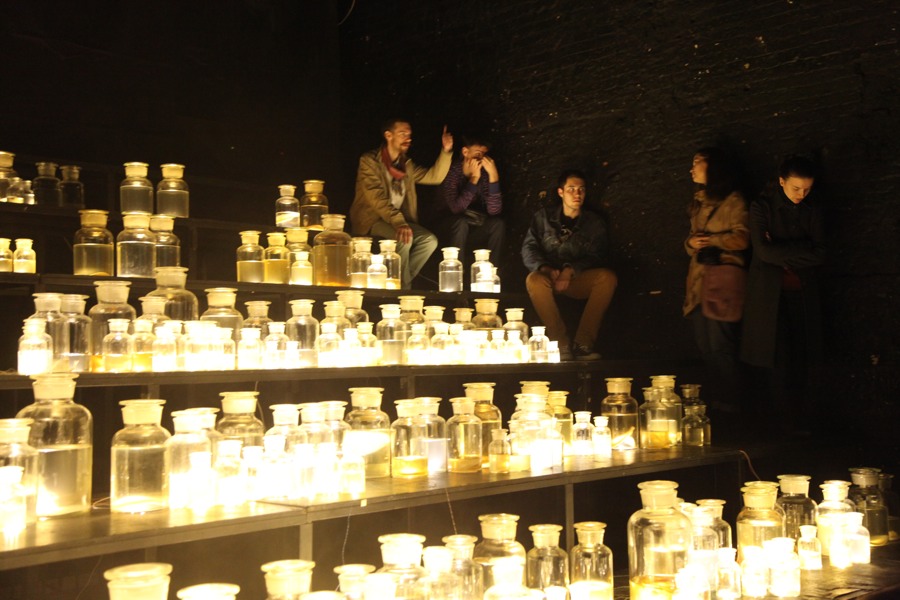 Of all living creatures inhabiting the planet Earth, the Kombucha-Dostoevsky fungus is the least studied and the most mysterious creature. There are several reasons for this, we will focus on the main ones. (The reasons for this, including the most important ones, are so numerous that it will be necessary to get information carriers larger than this sheet or two papers for a brief description of them, so I will restrict myself and briefly bring some  concerning mushroom called Kobucha- Dostoevsky (that is, a tea mushroom (Japanese or Chinese)), and to be more precise, on my own fungus, more precisely the family, because for less than a year of a stay t my house the mushroom has grown, matured and got a family, and if I did not control its fertility (as the People’s Republic of China is controlling the population of its country), then the growth dynamics of the fungus population would be equal to the increase in the population of the globe over the past 150 years.

The family consists of six members, which we agree to perceive as father, mother, three sons and a grandfather.

I named Father after Fyodor Mikhailovich Dostoevsky. Firstly, because I see a subtle similarity in the appearance of the fungus-father and Fyodor Mikhailovich, secondly, these two beings are equally dear to me, thirdly, I will continue my story and you will understand why I  called it Fyodor Mikhailovich, and not Stepan Anatolievich or Kuzma Alexandrovich. I called mother mushroom Kuropatkina Agrippina Semyonovna, because she refused the name Dostoevsky for professional reasons. Her name is too well known in narrow circles of art critics , so she could not prefer family to her ambitions of art critic,  known for her implacable struggle with pathos, lies, philistinism, commercialization, criminal dilettantism, balancing on the brink of masquerade and a tent on one side and an amusement show – on the other. Agripina Semyonovna gave birth to three sons and one grandfather. It is clear that when we deal with mushrooms, then discrimination on the basis of sex, race, religion is also conditional, as well as the internal hierarchy, so Dostoevsky’s father, Fyodor Mikhailovich, is his own son, Alexander Vasilyevich Suvorov, and the sons of Dostoevsky’s father appear, sometimes, as daughters in the famous play Anton Chekhov’s “Three Sisters”, hence the names of the sons – Natasha, Masha and Irina Chekhov’s.

Despite some freedom in determining the family of Kombucha-Dostoevsky mushrooms, they lead a separate and closed life. Mushrooms are unpretentious, like all home dictators, they demand from their “owner” full  slavish submission and devoted love. Having a nasty and changeable character, the family, however, has also positive qualities, for example, mushroom hypnosis. Trying for the first time a drink made with the help of some of the mushrooms, you may feel unwell, sickly sick, chilly, puffy, but also at the same moment, you will not hear, but will feel the inner cooing and – a surprise – a smile on your own face. You will experience similar symptoms for the second and third time, but on the fourth you get used to the action of the fungus, you will start to feel that the fungus helps you cure your disease, that you become smarter, more beautiful, higher, you have warts and hair on hands desappearing, your skin becomes lighter, and the mind more sophisticated, the memory clearer, the sweating of the legs decreases, and the curve of the quantity and quality of your ideas grows like the birth rate of the fruit fly, that are by the way, the eternal companions of this fungus. I will dare to call this effect – the effect of Kombuchi-Dostoevsky, because in reality nothing like this really happens. Socks, if they are not changed daily, still stink, and the mind, if not read and / or write books, train with gymnastics for mind, will come to stagnation according to the third law of thermodynamics.

Mushrooms, if not resist them, can suppress not only the family in which they live, but also a whole settlement, region, region, country. Let’s remember when the tea mushroom got its unprecedented spread, in the 80’s – did not it? In each house there was a three-liter jar with tea mushrooms on a windowsill. And what happened next? What happened to the country? The Great Soviet Empire collapsed? The property of our mind never admit the fact that the Soviet Union ceased to exist because the Chinese tea mushroom reached its critical mass per person and with the help of mushroom hypnosis led citizens to dissonance, crisis and deconsolidation of society. You can argue that it was not profitable for mushrooms, since tea and sugar began to disappear from stores, but the secret mushroom doctrine does not rest solely on feeding themselves, it is interesting for mushrooms to realize their hegemony on world domination and in such a way that no one can guess about their plans not only before this happens, but also afterwards, that is, always – that no one ever guesses that the tea mushrooms have ambitions for world domination, and for this they would sacrifice a few years of starving life.

All other methods, such as pouring the fungus into the sewer, dissolving in acid or alkali, burning and so on do not work.

What is useful is the mushroom. The Kombucha-Dostoevsky mushroom serves as a natural communicator between people. Thanks to the tea mushroom, a young man can find a girl, a mature man a woman, and an old man is a young old woman. On the basis of serving the tea mushroom, the families get started. I can list the families of people who have a friendship with me for many years thanks to the Kombucha-Dostoevsky mushroom. The fungus has pronounced paranormal properties, but, despite its harmful strategic line, in a short run it might be very useful.

For example, the fungus stimulates sexual activity of women, accumulates all known types of radiation, deriving it naturally through a decrease in the strength of its own properties, which we mentioned above/ It is also a natural saboteur, and also creates a unique coziness and relaxed atmosphere wherever you place it.

Considering all above mentioned, as well as the things I have to keep silent about under the conditions of the control by the state, foreign organizations and a wide range of consumers, I assign the following value:

* In all cases the fungi of the Kombucha-Dostoevsky family are transferred without the cost of dishes.