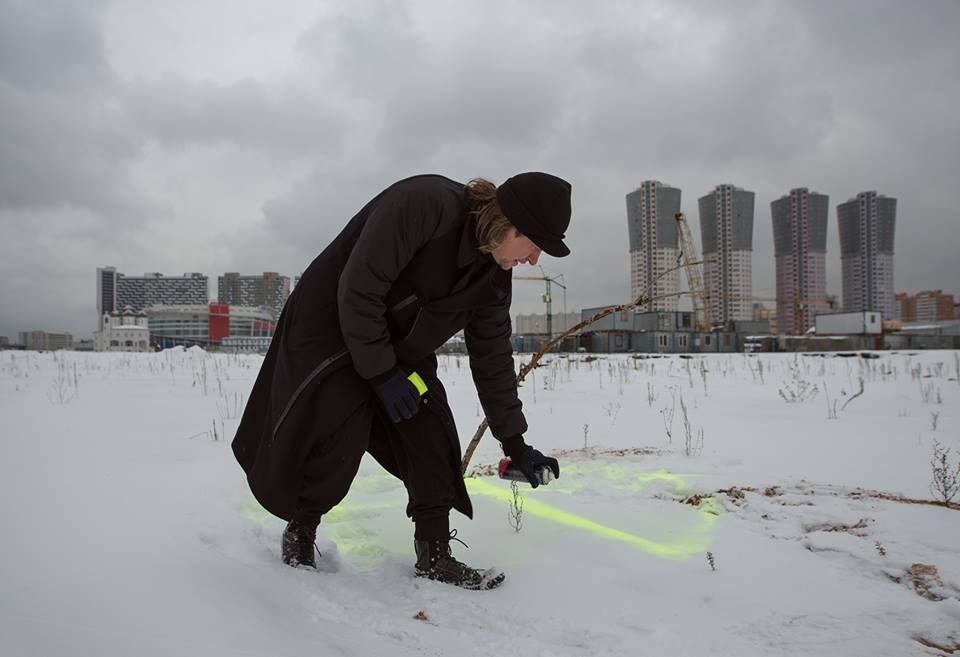 The exhibition took place on November 4th, 2016 at Khodynka Field in Moscow, Russia, where two years ago the Minister of Culture of Russia Vladimir Medinsky laid the foundation for the new building of the National Museum and Exhibition Centre for Contemporary Arts (NCCA).

It is the largest museum for Contemporary Arts in Russia, which is scheduled to be opened in 2018.

The Project Dig reflects the uncertanity and liqidity of our contemporary times. The  project could be seen as an exhibition or it could not be seen as such – this depends on the visitors’ interest in digging. The sculptures found in this process could be recognized as images of Lenin, or those of any other historical person.

This exhibition fixates on gap condition, where emerge several options
of the future (futurability).

Two aspects are important for the exhibition: place and time. The place is the largest and still unbuilt contemporary art museum building. Сonsidering the situation of the culture financing there is no certainty that this museum will ever be built here. Сondition of uncertanity, fluidity, liqidity

Two years ago the Russian Minister of Culture, Vladimir Medinsky, laid the foundation for the new building of the National Museum and Exhibition Centre for Contemporary Arts (NCCA). Developed design stage was completed. The 4th of November is a national holiday in Russia, Unity Day. This date is supposed to replace the other revered date in mental postsoviet consciousness – November 7th – „Great October Socialist Revolution“ Celebration. The artificial nature of this holiday plunges us into liquid jelly (precedents – Soviet shift of Christmas into the New Year, the Christian shift of the final day of the pagan Saturnalia into Christmas, etc…)

An important idea of this exhibition is the left peripheral discourse particles. Today, Lenin`s image is changing. In the 90s artists used his image as an icon in a postmodern game so intensely that eventually this use became Mauvais ton. Today they take Ilyichs`s image more seriously. (We may speak here about Lenins`s role in October Socialist Revolution and how it impacts the entire 20th century).

There is another question that is brought up in connection with the Dig exhibition- that of Lenin`s burial according to the Orthodox tradition to burry the dead ones. This could be realized if there weren’t so many in favour of leaving Lenin´s body in a mausoleum. So the situation is also in flux. The current government, the Communist Party, the Russian Orthodox Church, society, and so on opposite each other. The digging up of Lenin is a rather rare metaphor, which gravitates modern left peripheral discourse thinkers becouse the figure of Lenin requires modern thinking of Russian capitalist system with specialized features such as resource-based economy, putinization, corruption and self-isolation