The Tsaritsyno Museum-Reserve presents the exhibition Sergei Sergey Katran’s Snow Policy. The exhibition combines the capabilities of the architecture of the XVIII century and modern art.

Katran conceived the exhibition “Politics of Snow” as a gigantic installation, part of which includes the interior of the neo-Gothic palace, elements of its external decoration, and marble statues of the 19th century. Decorative rosettes on the facade of the building turned into “snowflakes” and took their place on the stele and flags that adorn the exhibition space.

The project is based on a fantasy of climate failure, which caused unprecedented snowfall in the summer months. For visitors to the Opera House, this strange natural phenomenon will not be a catastrophe, but the opportunity to take a fresh look at the palace (architect VI Bazhenov, 1785) and the famous Sheremetev collection of sculptures from the Ostankino Museum-Estate in Moscow. In this case, the viewer is included in the mystification, becoming its object and participant.

Snow Policy – a practical embodiment of the idea of ​​Boris Groys. “Let’s take the snow covering the Russian cities in an even layer. He is the artist, the powdered streets are his exhibition, you can criticize or praise him, but the artist’s plan will remain unknown, because it is impolite to impose your own anthropocentrism on such a consistent phenomenon of nature. So we get a romantic background. , and an absolutely hermetic modernist object, an innocent, abstract, always implacable site-specific. In the future, only snow, rain, sunlight and some others, absolutely non-commercial, by the way, nye phenomena and will be perceived aesthetically, and everything that makes a person will eventually become the domain of pragmatics – lower (bicycle-bomb) and the highest (politics, art) of the order. ” (Boris Groys. Snow as an artist.)

The start of the project was the performance of the PoemaTheatre group. The exhibition demonstrates the consequences of the weather anomaly: snow installations with the participation of Ostankino statues and plasma screens with performance documentation. A part of the installation is a sound composition specially written for the installation of the Politics of Snow by composer Vladimir Rannevym.

The exposition is accompanied by a sound series consisting of phrases from real media publications about heavy snowfalls, sung by the soloist of the Electrotheatre by Alexei Kokhanov. 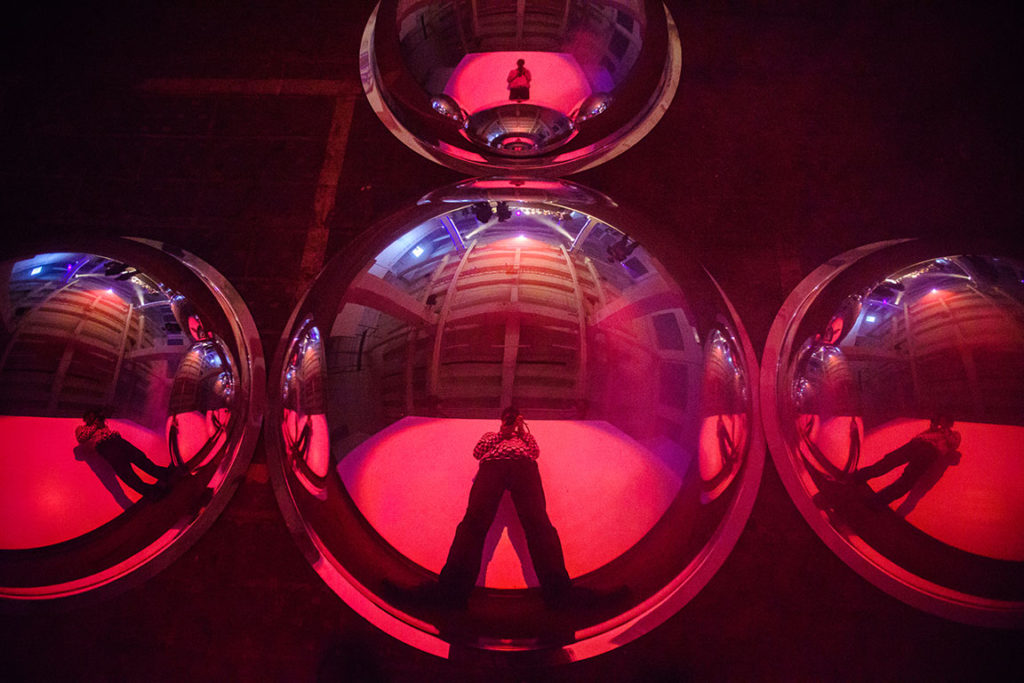 https://www.facebook.com/events/2006822862738084/
Perevedenovsky Lane, 18, Moscow, 105082
Dates: November 8 – December 6, 2018
Participants: Sergey Katran, Kuzko Alexey, Roman Minaev, Anna Semenova, Natasha Timofeeva, Anya Tretyakova.
Invited guests: Alexander Minchenko and Alexander Batalov
Until December 6, 2018 space “Olivier” TIC Factory opened the exhibition (from November 8), which presents the joint installation of the Members of the Expert Council of the Tretyakov Prize.
The Phantom Museum is an attempt to create free space on the territory of art, to rethink the many interrelationships between institutional and alternative contexts of modern art and to construct the ideal “museum of the future”, the utopian center of modern art.
The Tretyakov Prize is an art project, a grassroots initiative that draws attention to the situation of the tightness of the Russian art scene. The aim of the project is to create an alternative environment in relation to state and private art awards, putting in focus the principles of popular voting and movement towards interdisciplinarity. The project combines an online gallery, options for critical remarks and sets as its mission the discovery of new names in art.
United by the project “Phantom Museum”, the participants raise the question of the actual need for institutions for the development of the artistic process. The artistic practices of each, in one way or another, are reduced to questions of the autonomy of art. Is the existence of an independent artistic environment possible? Are we able to create an alternative to hierarchical connections in modern art?
On November 16, the ceremony of awarding the Tretyakov Prize was held in accordance with the results of the popular vote in the nominations “Project of the Year”, “Unrealized Project” and “Tucer of the Year”, as well as an exhibition of prizes, each of which represents a work of art by the Members of the Expert Council. choice.
Members of the jury of the Tretyakov Prize

With a root torn from reality, the amputated museum of modern art does not disappear without a trace. Its contours flicker, the places of exposure of works of art store the unrealizable memory of levels. Photons are reflected from invisible walls, leaving bright rectangles of the video that did not happen on the flickering planes. It is impossible to fight against the consciousness of the artist, it is not able to accept the ban. The thinking of the artist is arranged in such a way that there is a short way from the project to its implementation. The project of the Museum of Contemporary Art, existing and real, but rejected and rejected as superfluous by imperious ideologues, provokes the consciousness of witnesses to the point of singularity to phantom pain. Performances at the Singular Symposium jointly with Natalya Timofeyeva and Vika Malkova, as well as performances of the Single Picket at the Khodynsky Field and Venice during the Biennale of Contemporary Art, organized by me together with Katya Bochavar, as well as a series of exhibitions The Internal Manifesto, the new initiative Tretyakov Prize of Ani Tretyakova, Natasha Timofeva , Anna Semenova-Gants, Alexey Kuzko and Roman Minaev, designed to raise the pathos of the elitism of Russian art and establish normal participants in the symposium and friendly contacts between participants xy ozhestvennogo process – all these practices provide the foundation and grant excessive energy space of the future building. An unpresented museum in advance receives the right to life in the reality of our consciousness and this registration makes it super-real, indestructible and protected.

Vision: An exhibition exploring the twilight world between human and machine creativity. The exhibition shows works by selected artists linked to Goldsmiths and artists from the CYLAND MediaArtLab based in St. Petersburg, Russia. Developed in association with the Youth Education Center at the Hermitage Museum and The Leonardo Journal, the works shown include Virtual Reality Installations, Sculptures, Computer Art Installations, Video Art Installations and Machine Learning Art.

The exhibition will be accompanied by talks and panels led by Theodoros Papatheodorou (Head of Goldsmiths Postgrad Computational Arts Course).on the afternoon and evening of Friday November 9th, details to be announced.

I’m grateful to Dmitry Pilikin and Albina Motor for the invitation to the “Waterfront” exhibition, where I got the opportunity to develop the idea, initiated by the exhibition. The idea is “until there is no word”, and I created a five-meter sculpture titled “The ripples on the water”, which laid the ground work for the future, since the idea is to create 6 more sculptures.

The personal exhibition of “Alfa, Beta Paradise” came to being after receiving the invitation to open it in the legendary space of the KISI Tipographia (Krasnodar Institute of Modern Arts). I would like to express my special gratitude to the art-group ZIP and congratulate them upon the Kandinsky Prize. ZIP-ZIP! HOORAY! Eldar Ganeev, Stepan Subbotin, Vasili Subbotin, Evgeny Rimkevich are their names. Big thanks to Valeria and Julia Kazas for an unforgettable trip to the seaside.

The happening “Children of geniuses camping” took place at at the famous festival “Archstoyanie” – thanks to the curators Anton Kochurkin and Julia Bychkova who invited me there. Thank you for taking this risk! After all, no one knew if gown up and sober people would want to fill barrels with their bodies, representing the ideas of crowdedness and discomfort.

In fact, I was not going to list all the exhibitions in which I took part this year in order to sum up the result of this year, but my friends insisted. After all the friend exist to make our lives more complicated. Happy New Year, friends! Let’s keep it this way!

There are several more reasons to turn to this genre again.

This year in summer as a part of the international exhibition project “Street as a museum. Museum as a Street ” at all stops of Samara several great artists presented their conceptual posters on the theme “food as a social machine”. There was also my work titled “Ten irascible BADs”. I would like to send many thanks and my best wishes directly to the organizers Neli and Roman Korzhov’s to Samara! Happy New Year!

The exhibition titled “Movement” was held on Solyanka. Rhythm. Dynamics. I did not expect anything special from the exhibition, but it turned out to be full of surprises. All of a sudden, my “Seeds” began to attract certain interest. Then Olga Sviblova appeared and claimed the author. She appraised my work generally set me up for some new heights. After that, all sorts of unthinkable proposals and awards fell on the “Seeds”. We praise the organizers – the Agency Artis, Anstasia Potanina and Olga L’vovna!

Two final exhibitions of this year are now running in my beloved Electrozavod Gallery and the in the gallery Belyaevo. The Exhibitions are different. The Christmas Exhibition in Belyaevo became possible with the invitation of Vitaly Patsyukov – a man my love, respect and trust for whom is endless.