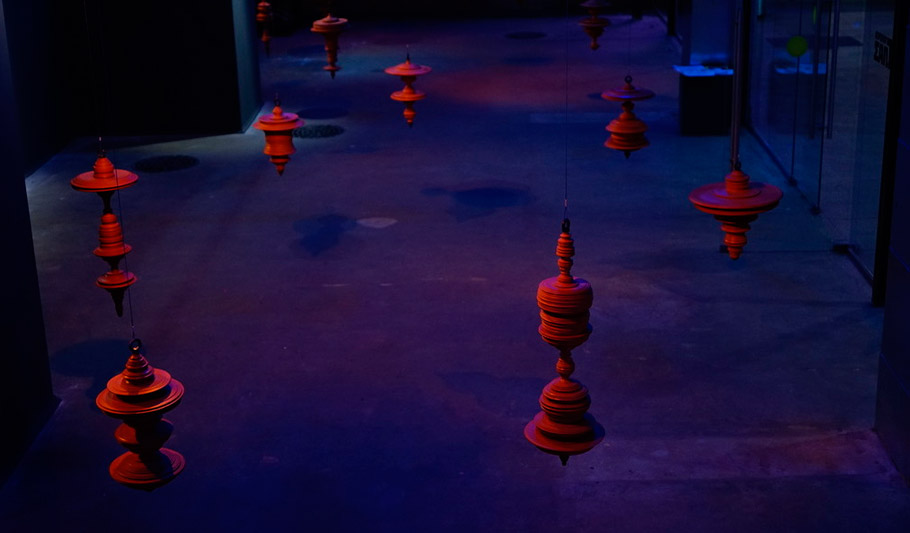 Sergei Katran invites you to see and touch the Word in his exhibit Until the Word is gone, presented by Gallery 21 (Winzavod Contemporary Art Centre) from 10 March to 15 April 2016.

This multimedia project, which combines various forms and genres of contemporary art: audio and video art along with vocal and dance-based performances. The theme surrounds a key concept in contemporary culture: that of the word, which plays the most vital of roles in all of its manifestations. About the fate and role of the word in the media space, on the devirtualization of the word and of its transformation into a visible, perceptible object, as well as a new interpretation of what the word means in contemporary art.

The artist behind the project, Sergei Katran describes his idea like this: “The virtual word becomes a material object. This transformation happens right before the eyes of the viewer. The thing thus obtained belongs to the impossible class of objects, or more specifically, to the ambiguous: Is it linguistics or is it art?

The project, titled Until the Word is gone could be described as science art, a popular contemporary form the compositions of which always strike a balance between spontaneous creativity and learned knowledge. For that reason, specialists from all lines of creative and scientific work. The audio installation Neobabylonian Dialogue is a work co-created by Sergei Katran, famous poet and polyglot Willy Melnikov and electronic music guru:vtol:Dmitriy Morozov. For the installation, Melnikov translated the word “art” into more than 60 languages. The result was “an experiment in summoning up the builders of that ill-fated tower <…> they quickly soon become involuntary polyglots, learning to intuitively understand each other’s foreign speech while working toward their shared goal.” (Melnikov).

In order to more deeply understand the means by which symbolic systems are acquired, the exhibit at Gallery 21 includes Ritual Game, a video installation by artist and inventor Katran and the media-Poet Natalya Fyodorova. The game takes us back to prehistoric times, before writing was invented, when players could make up symbols without being obliged to imbue them with meaning.

The video documentation of the spoken word work Talking it Over with Rose, Sergei Katran and the German artist and  biosystems specialist  Rose Rücker experiment with a word, breaking it down into its elementary particles or DNA helices, bringing to life thoughts upon words upon new thoughts.

The opening of the exhibit on 10 March will be marked by a the premiere of Translation, produced by the concert dance company Poema. The performance, which illustrates the process of of how words and sounds are transformed into body movements. By disappearing, the word “art” gives life to itself, not in the conceptual sense, but in material form.