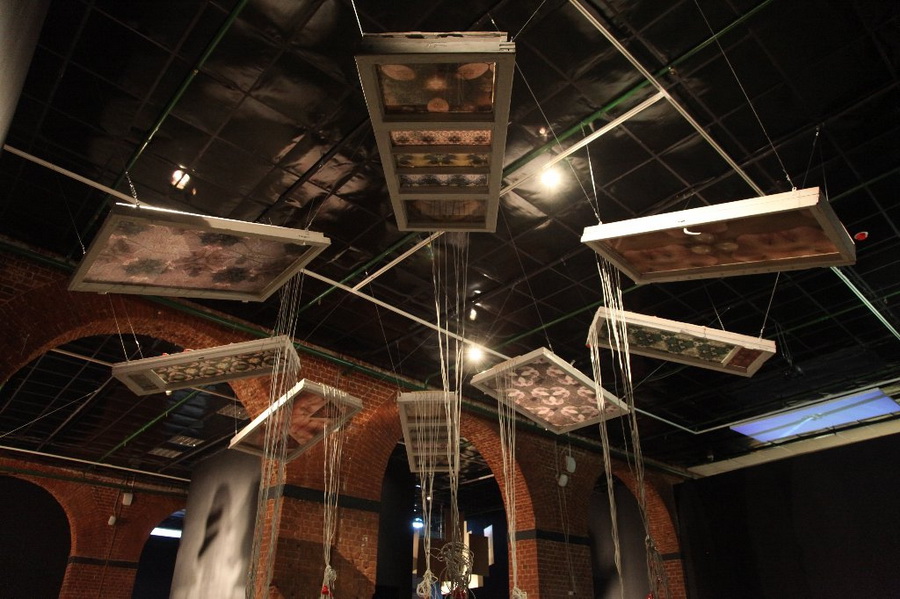 The interactive installation “Garden of Unearthly Delights” correlates with the triptych of Hieronymus Bosch “The Garden of Earthly Delights”, where the central and left parts contain images of “Paradise”, and the right one – of “Hell”.  Bosch presents viewer’s with a grandiose field of various extracts of pleasures and punishments, encoded, however, in the unique poetics of Bosch. As for my work “The Garden of Unearthly Delights,” we can not speak today of high matters, if you wish, sublime, without settling the question of ethics, since we can not today operate with the concepts  of “Hell”, “Paradise”, “Grace” and the like.

The highest pleasure today – what is it? the vital need of a human being or an animal rudiment left from an intemperate and hungry animal? In addition, “the highest pleasure” for an intellectual may be different from the “the highest pleasure” of the lumpen. Everyone solves this problem in their own way, avoiding contemplating pleasure, its excessiveness, debauchery, we can not but mention names that contributed to the liberation of our minds, including sexuality as the cornerstone universal formula for obtaining pleasure. Sigmund Freud and his associates withdrew taboo on the topic of sexual relations.

The sexual revolution of the 60th century of the twentieth century caused by the invention of contraception made free relations in sex a norm, which led on the one hand to simplifying of courtship, and on the other hand to increasing of number of sexual partners and interpersonal collisions. The invention  of LSD by Albert Hoffman (1938) and the active research and propaganda activities of American scientists Stanislaw Grof and Timothy Leary in the 60s led to the creation of the “New Age” movement, which used LSD in spiritual practices to expand consciousness, which influanced the formation of the counterculture of the 1960s and 1970s.

The idea of ​​higher pleasure for the human person is found in consciousness and subconsciousness as in the functional essences of an organism, matter. How, then, does the “terrestrial”, the physiological, become “not terrestrial”, “divine”? What mechanisms turn the physiological, psychophysical process into a spiritual practice? Where is this “metaphysical bridge” between Earth and Heaven? At what point, pictures of the beautiful in the everyday encoded with the help of a kaleidoscopic image, transform the low into the sublime?

In a way, it is art that transforms the low into the high. In this sense, art acts as a “catalyst” that cardinally changes the poles from minus to plus …